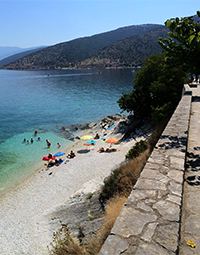 Agia Efimia at Kefalonia is one of the most traditional and picturesque villages in Kefalonia. It is considered an ideal place to start your trips around the island, but also one of the most attractive ports opposite Ithaca.

The traditional architecture, the hospitable residents, the magnificent sceneries, the picturesque bay with the fish taverns, the restaurants and entertainment shops, the endless view of the Ionian Sea and the island of Ithaca, the green landscapes and the crystal waters, create an ideal place for the summer holidays. In the summertime many sailing boats gather here to find supplies and a good rest from the more frequented places of the Ionian.

Agia Efimia at Kefalonia consists of a collection of tranquil bays with beautiful pebble beaches. “Stamoulis Apartments Kefalonia“ are 150m from these beaches, making them easily accessible on foot. Also within walking distance is the local grocery store, tavernas, cafe bars as well as the scuba diving school.

The town is located at a 9km distance away from the harbor of Sami and it has magnificent landscape and beautiful beaches. Very close to the center you will find the famous Antisamos, Agia Paraskevi and Agia Efimia Beaches, but also many charming little pebble and sandy bays across Sami΄s coastline. Myrtos Beach Kefalonia is the "great gate" of Pylaros, a really breathtaking beach famous for its wild beauty and the clear blue waters.

Tourism is well organized in Agia Efimia Kefalonia, and the visitors may get all the services needed for a fine holiday.

The Island of Contrasts

a mix of mythology and history

Kefalonia is part of the Ionian Islands and one of the prime vacation spots in Greece.
It's the largest island in the Ionian Sea, 786sq.km. in area and with 254km. of coastline. 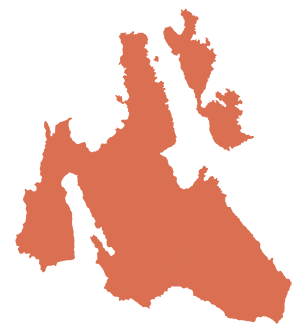 Considered as the jewel of the Ionian, the island is generously endowed by nature, a place with rare geological phenomena, mysterious caves, therapeutic springs and subterranean water with superb beaches, traditional villages and rich archaeological finds. It is celebrated for its dramatic scenery combining mountain and sea.

In Kefalonia you can enjoy the Greek nature, the fresh sea breeze, the welcoming waters of the Ionian Sea, the traditional Greek cuisine and last the unique Greek hospitality!

Most visitors have made Kefalonia a yearly trip and have marked it as an unforgettable destination.

Here you will find useful information for sightseeing tours, the best beaches and everything you need to make your accommodation in Kefalonia unforgettable.

Kefalonia is one of the few islands in Greece that is accessible by an extensive number of flights and ferries.

There are flights to Kefalonia from the Athens Airport "Eleftherios Venizelos" although in summer the airport handles a number of charter flights from all over Europe.

Ferries to Kefalonia from Patra and Kyllini.

The island of Kefalonia is connected with most of the other Ionian Islands (Zante, Ithaca, Lefkas).
For information about flights and ferries from Kefalonia to other destinations in Greece, contact the island's airport or the port.

With Points of Interest 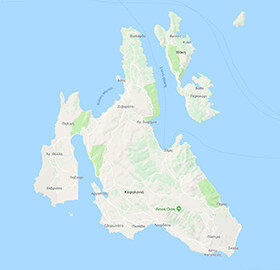 Stamoulis Apartments in Agia Efimia Kefalonia are well equipped with the appropriate facilities to meet your requirements for a comfortable holiday.
All rooms are set within a beautiful garden and offer a peaceful and private atmosphere ideal for absolute relaxation.

If you have selected Kefalonia as the destination of your vacation, send us your message now so that you can book the type of Kefalonia accommodation most suitable for your needs at Stamoulis Apartments.

The Island of Contrasts
a mix of mythology and history